The good news is we got the manufactured sample UMDs this week and they passed Sony bug testing - except for a technical failure. And that's the bad news: the production ID on the disc had a technical failure, so we're remaking the image now and making 20 more manufacturing samples that will pass the check. Yes, it sucks, and we're tired of the wait, too.

Sooo, to take the sting of more waiting out a bit, we're going to share some of the secret we've kept that we wanted to surprise purchasers of the physical+digital set with when they opened their shipment.  Every physical copy of Class of Heroes 2 will ship with a special certificate we made that also features a laser-etched, numbered holographic sticker. The sticker is in a box on a scored tab on the right side of the certificate.  The numbered holographic sticker will exactly match another hologram on the back of each game package.  We're going to keep the hologram itself under wraps, but here's what the 4" x 7" custom-made certificate will look like: 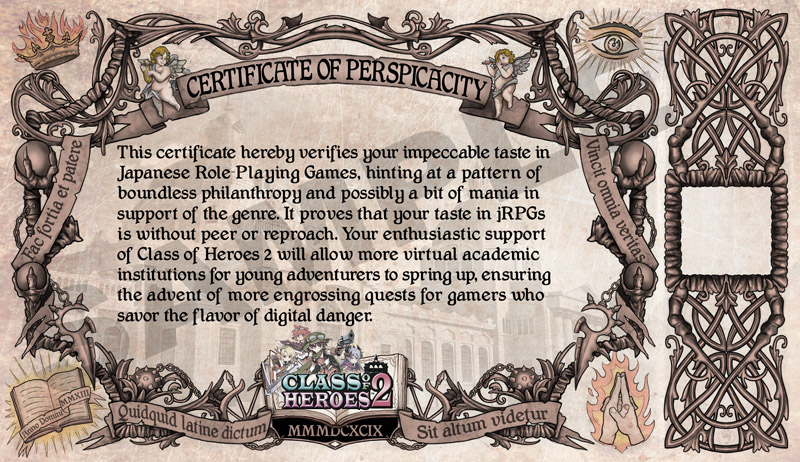 (The hologram goes in the box on the right side)

Thanks to all the physical+digital purchasers for their patience in this process.  All digital codes were distributed on June 3rd.  If you bought a physical+digital version and didn't get your digital code, email us and we'll re-send your PSN code.  Once we receive the manufacture UMD samples for version 1.01 and have a timeline for the actual pressing of the production run, we'll post here and in the forum here.  Thanks again for the patience. We hope you like this little extra - it's even better in person!

A recap from last update: The UMD was pulled from production last month when some of the digital users found a problem with the Alchemy Recipe system that caused the wrong recipes to be unlocked.  It did not affect the ability of players to complete the game, but it was annoying and affected about 200 or more recipes.  Rather than deliver a UMD game we knew was buggy, we pulled it, fixed the Alchemy Recipe bug and a number of other bugs reported by players of the digital version, retested the game, and remade the master UMD image.  The new build also adds a pointer to the mini-map screen showing which way your character is facing, a common fan request we were able to squeeze in to the fix.